Youth Reporter at AIDS 2016: The Activists Go Marching One by One, Hurrah! 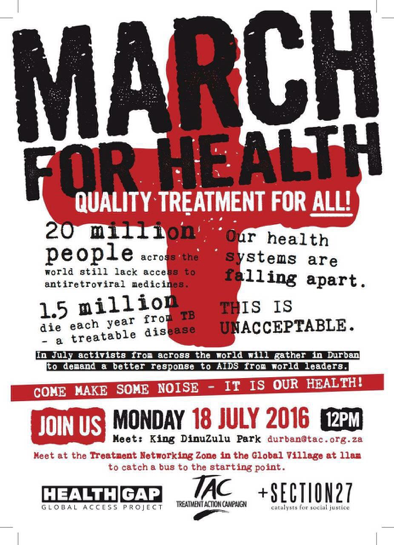 We started our official conference time with some serious action. A flyer was circulated on Sunday around the Global Village, calling for people to gather on Monday for a March for Health. The march was organized by Health Gap Global Access Project, Treatment Action Campaign, and SECTION27. Buses came to the ICC and shuttled us to King Dinzulu Park, where the March officially started.

Enroute the beginning of the march, HIVE?s own Shannon Weber went live on Facebook, sharing the loud, joyous excitement of the activists on the bus. Leaders sang, danced, chanted, and taught each other as t-shirts were passed around to the passengers.

Posted by HIVE: a hub of positive reproductive & sexual health on Monday, July 18, 2016

The park was packed and intense; everyone wanted a t-shirt and the organizers had to form human chains around the remaining signs, t-shirts and packed lunches. Most of the signs for the march were provided by the organizers; they call upon governments and the broken healthcare system to begin providing treatment, trained healthcare workers, and funding to the clinics that are on the front lines of the fight to curb HIV-related deaths and new transmissions. 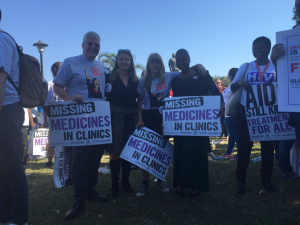 At the beginning of the march, we found the Red Card group, who we had seen in the Global Village the day before. The Red Cards operate just like a soccer red card: when someone commits an offense, you whip that Red Card out and watch their teammates squirm. 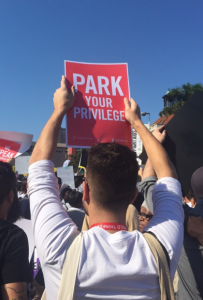 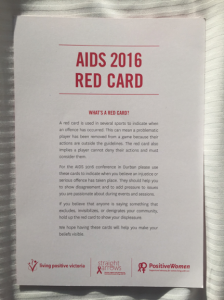 The Red Card contingent was carrying signs with all their slogans: ?Blah Blah Blah,? ?Your Morals are Killing Us,? ?We Can Speak for Ourselves,? ?Young not Dumb,? and ?Park Your Privilege.? They very generously let me carry the ?Young not Dumb? card, which I proudly marched with through the streets of Durban. 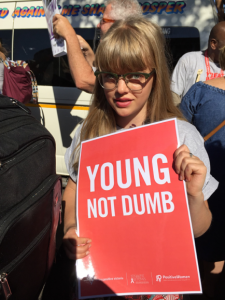 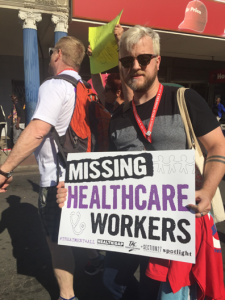 Though the march was slow to start, energy remained high for the majority of the walk. March organizers had collaborated with local police and traffic was safely blocked, though some extended pauses along the way as we waited for traffic to be cleared confused marchers at the rear. Our squad did spend some time speed-walking up the sides of the march, which offered us some excellent views of various parts of the march. 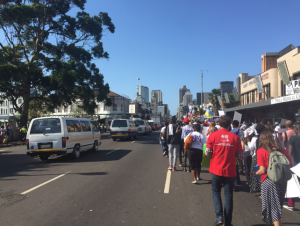 Dazon and the wonderful ladies from Women NOW: 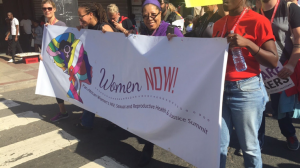 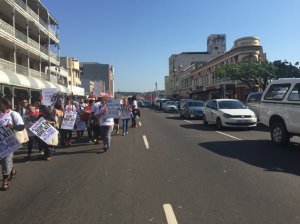 This fantastic Youtube account, MyFabulousDisease, has published a video covering the various issues confronted by the march, and includes interviews with marchers and facts about the treatment and response to the epidemic.

Along the route, I was stopped by two people making a video, who asked me about the ?Young not Dumb? Red Card I was carrying, along with some questions on my perspective on the conference. I didn?t catch their names, but would love to know more about the film or content they are creating, if anyone can help me out! 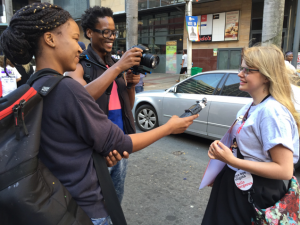 We also had our first #unihorn action: 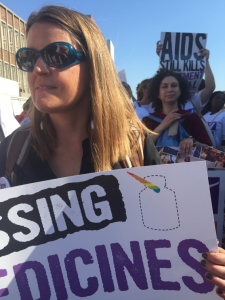 The medicines are elusive, similar to the infamous unicorn.

I downloaded my Snapchat story from Monday, where you can see several clips from the march, as well as other pictures from around the Global Village and ICC:

The march eventually made it?s way back to the ICC, ending with speeches from various community leaders.

The sea of posters crying for missing healthcare workers and missing medicines, calling out the broken healthcare system and continued deaths related to HIV spoke loud enough for the Global Village to hear, know and feel. But did it speak loudly enough to be heard at the Exhibition Hall or in the International Convention Center?

The messages and demands of the March for Health target governments and corporations, who play a major role in funding and organizing the International AIDS Conference. The activists? demands mirror the slogan for this year?s conference: Access Equity Rights Now.

If we are going to achieve access equity rights, the social, economic, and political barriers standing between AIDS treatment and prevention and under-resourced, high-risk communities must be brought down. The work of the activists who organize, march and try to get a seat at the table are vital in bringing the lives of everyday citizens back to the center of the conversation to end HIV/AIDS deaths and new transmissions.

Though we are only in day 3 of the conference, I am again and again awed by the resiliency, courage and strength of the community leaders and organizers who selflessly commit their lives to securing equity and transparency in the treatment and prevention of HIV/AIDS. I write with the hope that the cries for help were not just seen, but recognized and internationalized by those who fund and organize the global HIV/AIDS efforts. 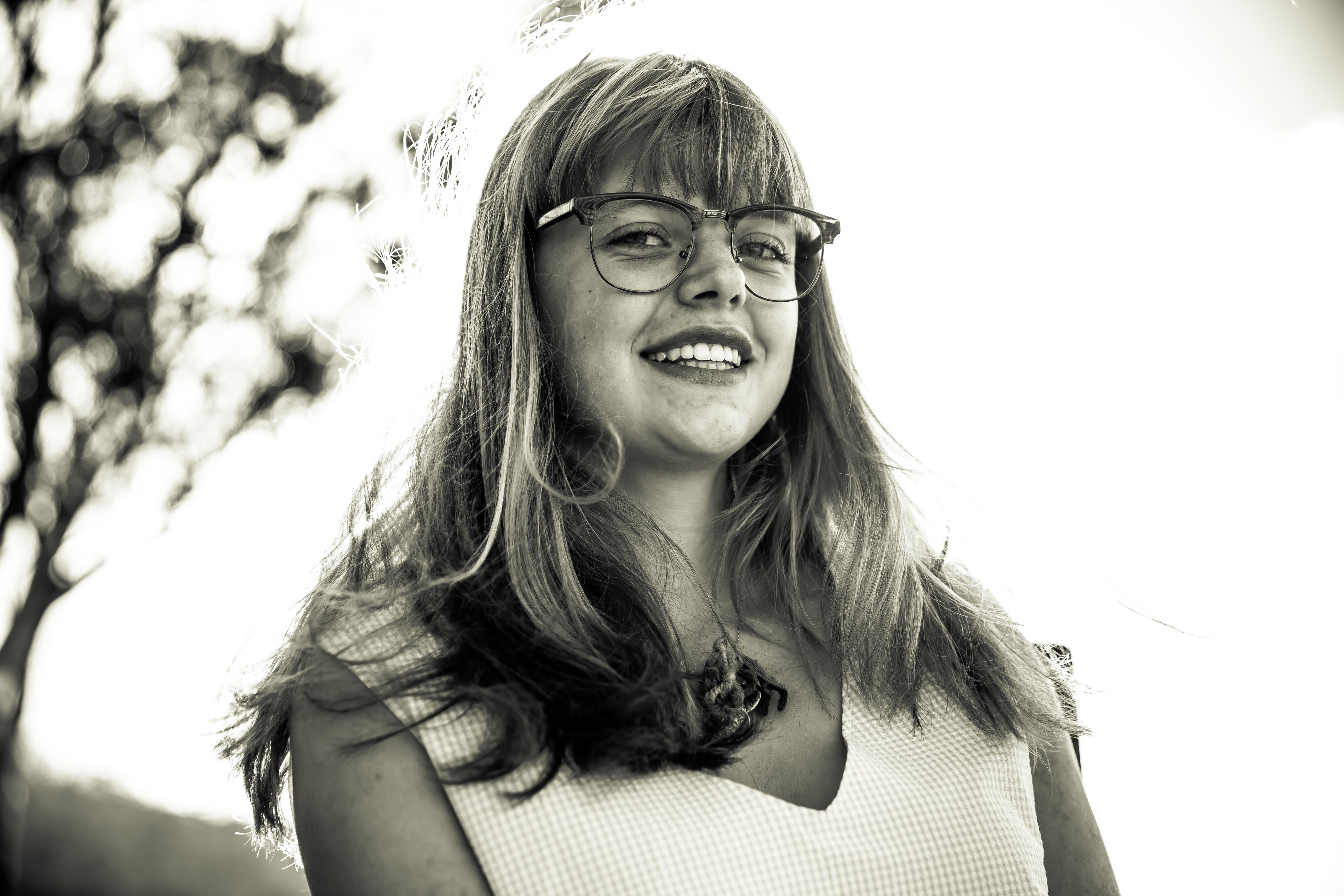 Taft Weber-Kilpack is a recent high school graduate from San Francisco. With a passion for reproductive rights and gender equality, Taft has volunteered with HIVE and Homeless Prenatal Program in SF, studied reproductive rights for independent projects, and made condom couture. When she?s not talking smack about the patriarchy, you can find Taft at her sewing machine (but she?s probably still fighting the patriarchy there too).