Some People Call Me a Supermom 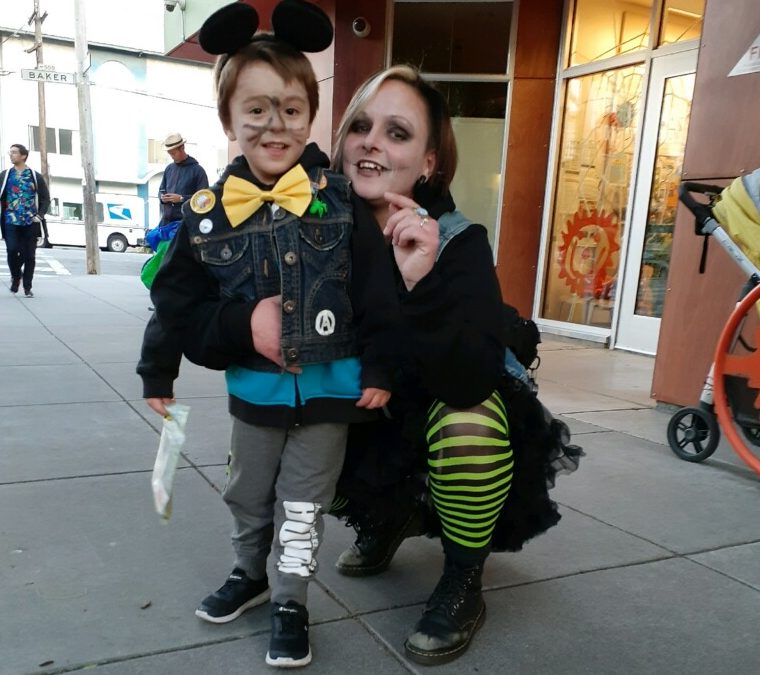 When I was with my husband, we got in this big fight. I pulled a knife on him and I ended up going to jail for it, even though he didn’t want me to. During that time, I decided that I wanted my IUD removed because I wanted to have a child. I did not expect to get pregnant so fast.

When I had my IUD taken out I felt like the doctor was very supportive about it, she wasn’t judgemental. Instead she gave me a prescription for prenatal vitamins. I felt? respected in my decision. I want judged for my lifestyle or drug use. I felt she saw me as a person who deserved the chance to have a family.

I started accessing health care through the Family Health Center [at San Francisco General Hospital]. The doctors there were kind and reassuring. For substance use treatment, I go to the Methadone Clinic. I’ve been on methadone since I was 21 years old. It was a struggle to see this tiny life i brought into the world shaking his little arms in withdrawal. Fortunately that lasted less than 30 min.They kept him really comfortable. For the most part, the nurses were helpful, and not judgemental about the fact that he was born on Methadone. I did have an awful encounter with a NICU nurse who had done awful things to say loud enough for me to hear.

I didn’t want to stay there after that- I don’t remember exactly what she said but it was something I probably just shut out. Sometimes I forget things without meaning to because I just don’t want to relive the experience, but it was unkind and cold, to say the least. I was angry.

The methadone clinic has been very supportive. When I was pregnant, I found a lump in my breast, and my methadone counselor left work and came over to [clinic] 1m with me to hold my hand while I got a biopsy. The doctor who works there has a daughter who has some nice hand me downs he offered. When I had my son, my counselor came to the hospital that night. He was born in the morning and she came that night when she got off work. I had just woken up right before she came, and she had a little outfit for him. It? was really nice that they always went out of their way to make sure I knew it was going to be okay, and that they had my back.

I had a lot of trouble getting housing and services. The welfare department doesn’t help with anything except good stamos until you are 6 months pregnant.

Even when we did get CalWORKS, it was only like $700 for the three of us. The hotel we were living in that my son got lead poisoning from was $1400 a month.

You can definitely tell when you’re homeless, you don’t look the same, your clothes aren’t always right out the drawer. You can tell by the way people/providers look at you, or maybe you just feel self-conscious. I was always self-conscious going to those appointments, but I always went because it was important. I definitely was thinking in the back of my head, ?I hope this goes well”.

When I found out I was pregnant, I was four weeks. I stopped using but I still had a track mark scar on my throat, and I always thought everyone knew what it was. I was always afraid that their judgements would lead to my son being taken.

It’s hard to be pregnant on the streets is difficult. If we miss an appointment, it’s not because we don’t want to be there. It’s because something happened, or something is going on. People that are experiencing homelessness and pregnancy deserve the benefit of the doubt. It’s their body. If they are hurting the baby inside of them, that’s one thing. Then there needs to be something implemented, but that doesn’t mean that they are bad people, it just means that they are struggling.

Once I had him, it was different because I’d been clean for nine months or whatever, so I felt like maybe it wasn’t so weird then. But when I first got pregnant, I definitely felt a certain kind of way when I would walk into the doctor?s office. I don’t ever remember them saying anything or doing anything in particular. People are people, especially people that don’t have a history of substance use or homelessness, you just know they have their own opinions, and I was always worried about what those opinions were, even though they never really showed it.

My husband is a big support. I have a couple friends, like my “mommy friends”. We were all using on the streets, and then a whole bunch of us started having kids around the same time, so some of them, unfortunately not all of them, still have their kids. Unfortunately, not all of them are doing the best things for their families, but the ones that I’m able to connect with are very supportive.

We are people and that I’ve been through a lot and I’ve done a lot to change my life to make everything better for my son. I pay $2300 a month for an apartment. I bring the main income in. City life is a struggle for many reasons…expenses, my son had mild autism, so the fat paved/loud city life effects him. I’m a good mom, people tell me I?m a super mom. Our history doesn’t mean that we’re not good people. Everybody deserves to be treated the way you want to be treated.

Jen lives and works in San Francisco and enjoys spending time with her son.