Sex worker community leaders at a consultation for PrEP

All names are pseudonyms.

My name is Narah, and I am a sex worker who has been in the sex work industry for close to seven years. I am the national coordinator of the Nigeria Sex Workers Association and also the Executive Director of Passion and Concern for Women Welfare Initiative (PACOWWEI), a sex worker led community based organization. 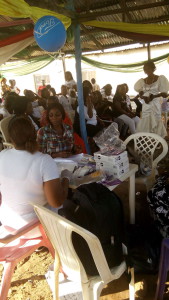 I have been working to mobilize sex workers from different parts of the country to form an Association that is strictly for sex workers. The zeal I have for sex workers is peaked because I am a sex worker: I wear the shoes and know perfectly how to pitch. I have been to many conferences both at home and abroad, and basically understand that my communities are left behind in the aspect of including PrEP (Pre-Exposure Prophylaxis, a once a day pill to prevent HIV) in our prevention packages. 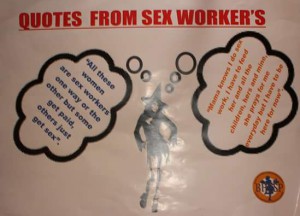 We need PrEP as sex workers in our country because most of our members are dying just because they have no knowledge about PrEP. Considering the type of work we do, we are vulnerable and many times we find ourselves in a place where we cannot help ourselves. So I want to reach out to any organization that works with sex workers in the area of PrEP to come to our rescue.

The experience that I personally had that made me wished that PrEP is in our community, was the day that I was drugged in a club and taken by some group of guys to an unknown destination that was like 120km from the town. It happened two years ago when I went to the club with my friends, we saw three men in the club and because we were three, too, they asked us to join them and shared us among themselves. We saw the way they were spending money and thought, “they have money,” considering how they looked. We negotiated and went to the other clubs and at about 3am we started going home with them and that was the last thing I remembered. I was drugged and throughout the time I was with them I couldn’t feel myself there, it was a total black out. I started getting conscious at about 3pm the next day and when I did, I found out that I was had no cloths and there was sperm all over my vagina. I was so lucky because I was tested and I was negative, but I got some other STIs. The question that keeps ringing in my brain was what if my test was positive? What of the other girls that will be, or are, so unfortunate to meet these bullies?

The following are two stories from my sisters:

Precious is a sex worker who is based in Abuja, the capital of Nigeria. She is a street based sex worker and always go to the club and pub to look for clients. She has been doing that for the past? 6 years. On one of the days in 2013, she was standing on a street and a “gentleman” picked her up from the street. Little did she know that the man was not really as gentle as he looked. After negotiations, they went to the client’s hotel room. Surprisingly, the man became aggressive when he wanted to have sex with her. When she offered the condom, he took it out of her hand and flung it to one side of the room. She became scared, knowing that it was going to be tough. She struggled with the man, and the man, being a man, overpowered her and had sex with her without the condom. After the first round of sex, the client started begging her to forgive him, saying that it was the devil’s work. After that, he promised to increase the money for her. She reasoned that since she had done the first round without condoms, and her money was being increased, that she should do the second and third rounds without condoms, too. When she was done with the client in the morning, she had no idea that she had contracted HIV. She didn’t find out until late 2014, when she became inexplicably? sick and she went to the hospital. She was advised to go for HIV counseling and testing which she did and it was reactive. Ever since she had sex with that guy, she has been having protected sex, and prior to that she had been having protected sex, so she was able to identify that as the incident where she was exposed to HIV. 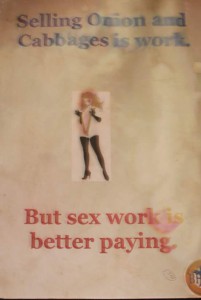 The second sister is Winny. She has been a sex worker for four years, and like Precious and I, she is street-based. She also hangs out in the street for clients to pick her up when they are in need of sexual satisfaction. This part of her story happened in 2014. Police always go out to arrest sex workers at night, and she was arrested with some other sex workers. The rest were able to bail themselves out because they had money, but because Winny didn’t have any money on her, they carried her around the city. At around 2:30am they parked and told her that since she didn’t have the money to bail herself out, they would take turns having sex with her. She pleaded and cried yet they didn’t listen to her. Unfortunately she had thrown away her condoms as that is one of the exhibits they use to arrest sex workers because she hadn’t known that they would ask her for sex. So Winny begged them not to have sex with her. They refused. Winny now asked them to use condoms and they said they didn’t have any, but she could provide her own. She explained that she threw the one she had away when they arrested her. Then they said that since she didn’t have condoms, that they would have the sex like that. That was how the four policemen came to take turns having sex with her without condoms.

There is a huge need for PrEP in Nigeria because, in our work, we encounter so many bullies and rapists. Sex workers need PrEP because it’s a woman-controlled HIV prevention method. We have a proposal for a PrEP demonstration project. Contact Narah to support this effort: nswa.nigeria@gmail.com. #PrEPNow #WheresMYPrEP 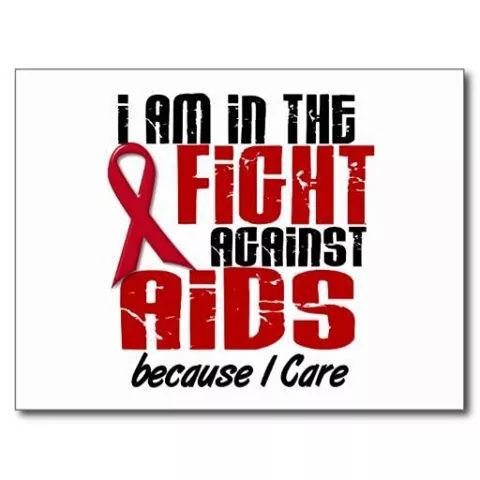 Narah is the Executive Director of Passion and Concern for Women Welfare Initiative and the Nigeria Sex Workers Association. She is fighting to have PrEP made available in Nigeria.