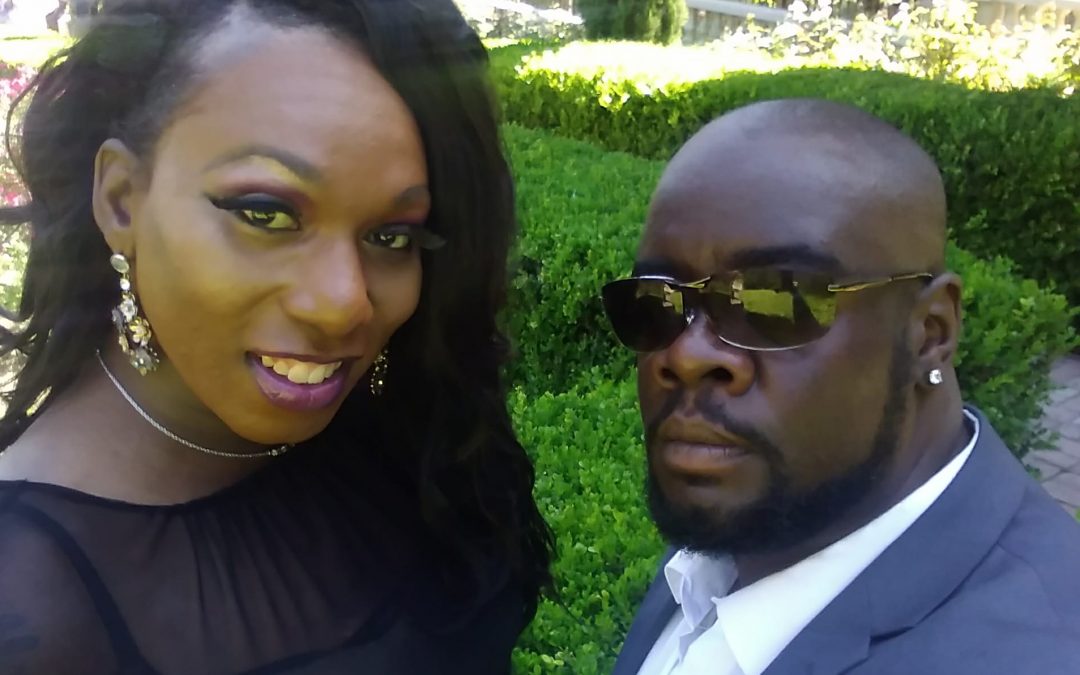 I first met Jaz in a committee meeting at St. John’s Medical Clinic. She sat in the corner, quiet and sweet. Then she spoke with a southern twang and a powerful force in her voice, she wanted to be heard. As she spoke, I could not focus on what she was actually saying, her accent made me tingle on the inside. After the meeting, we quickly became acquainted and went our separate ways. We would meet up again later at the Trans Health Conference in Oakland, CA. At the conference, we spoke again briefly, and we ran into one another throughout the weekend at the conference. The second night of the conference, we ran into each other at the hotel bar and spoke for a moment. My initial impression was that she was stuck up, entitled, and snooty. I figured she wouldn’t want to give me the time of day, so I didn’t give it a second thought and kept it moving. Later that evening, as I was going to my room and ran into her again, coincidentally her room was across from mine. As I am rustling through my pockets to get the key card, she stepped out of her room and asked me for assistance with her dress. I stepped into her room, she said, in her southern bell accent, “can you help me unzip my dress?” and I kindly obliged. After I helped her with the zipper, in gentleman fashion, I went back to my room unaware that she was interested in me. Back in my room, oblivious to her hints, I went to bed. We saw each other the next day and had a brief conversation.

I saw Jaz quite a few times after the conference at different events, but I don’t think she noticed me, which further solidified my thought that she, like other transwomen, wasn’t into transmen. December rolled around, and there was the Quest pageant where we would meet again. During the rehearsals, unbeknownst to me, she requested me to be her escort to the stage. We both won that night; she was crowned Miss Quest and I Mr. Quest. As we were on stage together in front of all the flashing cameras, I noticed she didn’t look like she felt well and I inquired about how she was feeling. She told me she wasn’t well and she was going to the hospital when it was all over. A few days later, I sent her a message on Facebook asking how she was; she messaged back and told me was in the hospital with a ruptured appendix. At that point as Mr. Quest, I felt it my responsibility to go see about her. I hopped on the bus and went to the store on the way to the hospital. I picked her up some things she might need, like body wash, lotion, some chocolates and a stuffed Poo emoji named Poo-Nicorn. I thought it would be funny and make her laugh because she was feeling sh**ty. I brought everything to the hospital and surprised her. As I came in the room with the bag of goodies I watched as her face lit up, even thru the pain, she still smiled. I stayed with her throughout the night.

We talked, laughed, and watched TV. The next morning, I woke up and gathered myself and got ready to leave. As I was leaving, I asked her if she needed anything, she said no and I took off. I jumped on the train to make my way back home, by the time I made it home I had a text message that read, “are you coming back?” It was Jaz. I replied “yes, I will be back later.” I returned later on that day and brought her some more goodies. I stayed with her for the remainder of her hospital stay, which was close to 3 weeks. Every day, I got up and left, took the two-hour bus and train ride home to shower, change, handle personal business and then make my way back to her. Every day during her hospital stay, we would talk for hours about life, advocacy, and everything else. Our conversations seem to get deeper and deeper as the days passed and we got closer. On Christmas day, I came to the hospital with a gift in hand, I walked in the room and she looked up at me with a smile and then the look shifted to one of surprise upon me giving her the gift. We had our usual talk time but later that night she asked me to lay with her and hold her, I again obliged. At that moment while holding her in my arms, I realized I was feeling her more than just a friend.

As we lay together in the hospital room, we talked about being a couple and what a future could look like for us. We decided were going to give the relationship a shot that night, what a Christmas gift. The day Jaz was discharged, I assisted her to her car and she took me home. Later that night she called me and we were thinking the same thing, we can’t sleep without each other. We talked on the phone till we fell asleep. I was aware of her HIV positive status through her advocacy work, as she is very open about it, and as an HIV/STI prevention advocate myself I knew what I needed to do to keep my status negative. I always appreciated her for being so open with me about her status and being able to trust me enough to talk about it without hesitation. So we talked about it, and told her I was going to start PrEP before we went any further in a sexual way and she agreed. I started PrEP the same week and just added it to my regular regimen of vitamins and medication. The interesting thing I noticed about taking PrEP was the fact that I had absolutely no side effects unless I took it on an empty stomach. It also gives me a solid peace of mind knowing that I am protecting myself and leaving more room for me to just enjoy life with her.

Now, four months later, we are almost inseparable most days. We work as a team in the advocacy realm and play together during our down time. Our quality time and being open to understanding each other is what keeps us together. As a trans couple, there are so many things we had to learn about one another, seeing as how we both were used to primarily dating cisgender partners. Another thing we had to learn was navigating life with one of us being HIV positive and the other being HIV negative and what that would look like for us. One thing I definitely have learned from Jaz, is we cannot control what love looks like or what package it comes in. I have also learned that her positive status doesn’t have to get in the way of us enjoying each other. There is so much I have learned about her journey into womanhood and I have been able to teach her the same about my path into my manhood. Before Jaz, I thought I knew what it was to be trans, but I have learned we all have much different journeys from person to person. I have been able to gain so much just by allowing my heart and mind to be open to new experiences and PrEP has been an important part of the journey. It has allowed me to just focus on our relationship and not have to worry about if my status has changed. I still get tested on a regular basis as I would do normally, but there aren’t any stress factors because I know we use protection and PrEP.

Luckie Alexander is a transman who is an advocate bringing about change that builds bridges within the LGBTQI community, looking to create resources and support around trans parents. He is also the Community Outreach Liaison for Alpha Omega Nu Fraternity Inc, a fraternity for transmen, member of Los Angeles County Transgender Advisory Council, and a proud member of the Brown Boi Project. He is an Army Brat and has lived all over the world, but Los Angeles is his home. Luckie has a passion for Gender and Social Justice. He has plugged in wherever he can with the community on boards, CABs, committees, and wherever he can be of service. He is committed to giving back to the community through education and awareness. He also provides healing through teaching mixed media art and computer technology. His experience in the community includes seven years working as a homeless shelter manager as well as a Peer Mentor for homeless and runaway youth in Las Vegas and Los Angeles. He has done speaking engagements expressing his story of trans experience and building awareness of the transgender community. Luckie is a dedicated member of the community and a single father raising three children to be open-minded and free thinkers. One day while on his way to a community meeting, he experienced violence on public transportation due to being trans. Luckie was aware that passing as a Black man in LA is more of a curse than a privilege, but it was during this incident where he realized his journey wasn’t really seen or understood by many. Upon taking an informal survey among other transman, he realized he wasn’t the only one who felt invisible. Invisible Men was born! An accompanying documentary is also coming soon!!!! I wanted to create a platform where we could tell our stories without taking up space in other ways. We are the only ones who can tell our stories and they need to be heard. -Luckie