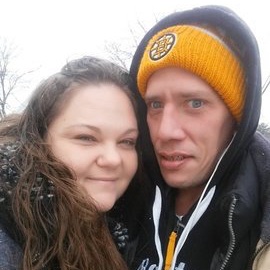 I never imagined that I would be sitting exactly where I am right now with the person I’m with, starting a life that most people dream of having one day: seven months pregnant with a baby boy and engaged to someone who I truly believe is my soulmate.

I met Nathan 14 years ago when I was in a rehab, newly sober from a heroin addiction. He was very open about being HIV positive and I was already somewhat educated about it, having an aunt that had died from complications of the virus when I was very young. But I had never met someone close to my age with it (I was 19, he was 23). I admired that he didn’t deny it or hide it from anyone. We instantly became friends, always talking, laughing, and making the best out of our rehab experience.

Over the next 12 or so years, we stayed friends but our addictions stopped us from ever having any real type of relationship. We would go a year without seeing each other and then he would pop up. I always knew Nathan cared a lot about me but I was so busy in my addiction to ever notice. We lost contact and I had eventually moved to California to try to get sober. About two years ago I came back to Boston for a visit and while I was here, I got a Facebook message from Nathan saying he’d love to meet up. I immediately said, ?COME NOW!?

Nathan has been sober now for 10 years and myself almost 6 years. He told me he’s loved me since he first met me and wanted to try to work into a relationship. Long story short, we spent the rest of my vacation together, having sex, but using condoms. I don’t think we talked much about his HIV status because it was something I had always known. I knew he’s been healthy, on medication and his viral load has been undetectable for five years now.

I went back to California, but after two weeks of realizing I had fallen in love with Nathan, I wanted to be with him. I got on a bus and moved back to Boston.

As soon as I moved in he told me, just know… “I NEVER want to get married and I never want to have children!” And it was because of his HIV. I laughed and said, “Yes, you will!” Like many women, I wanted both. I had heard about medications for HIV negative people that were in contact with positive people. I immediately started Googling. Nathan had never even heard of PrEP medication. I found a doctor in the area who supported and prescribed the medication and went to see him almost immediately. He prescribed me Truvada right away.

I had a few issues with insurance being willing to pay for it because I am HIV negative but it shortly went through.

We were not trying to pregnant, but we were not using any prevention either. Within a few months, I was pregnant!

I go to a special Infectious Disease/high risk clinic for all my prenatal care. Me and the baby are very healthy in every aspect. I chose to keep taking the Truvada during my pregnancy. It’s what we feel comfortable with.

I wish that more people both HIV negative and positive could be educated about PrEP. So many people don’t even know. HIV is not a death sentence! PrEP has given me a way to spend life with the man I love while also bringing a happy, healthy baby into the world!

Erin is 33, preparing for her and Nathan’s new baby and upcoming wedding! She is currently on maternity leave from her job as a Recovery Specialist at a local rehabilitation center.